NB: This blog entry comes courtesy of the students and staff at Chifley College Senior Campus, Mount Druitt. Many thanks especially to Dianne Harper. 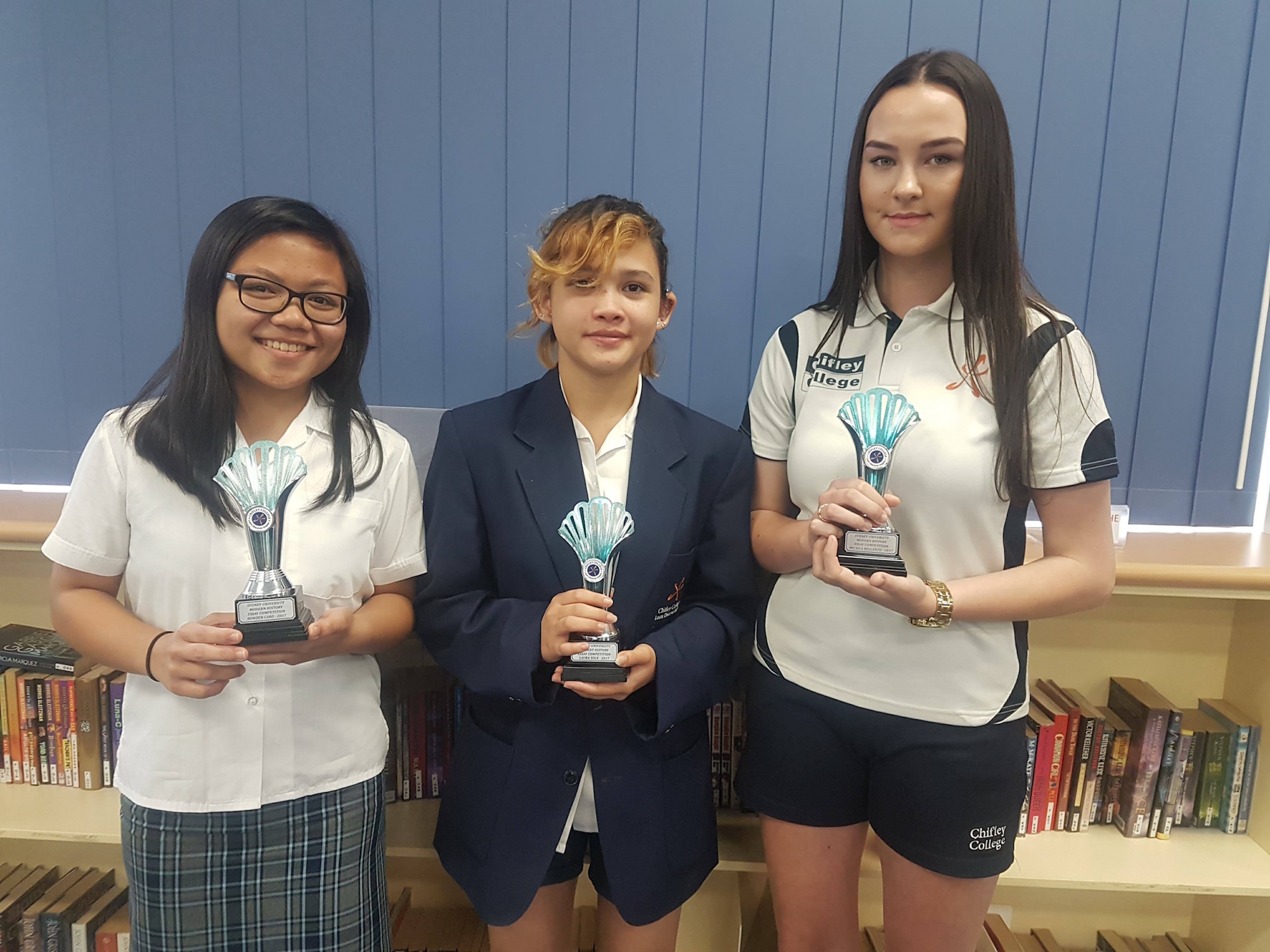 Prize-winners Laura Sole, Rowzen Caro, and Micaila Bellanto
The development of cults in Roman Egypt was influenced by both Egyptian and Greek traditions, and the abolition of the slave trade played out very differently in England and America. Participants in the Cult of Isis were promised the secrets of life and death and the transatlantic slave trade had both long term economic and social effects.
These are some of the interesting facts that Chifley College Senior Campus students explored while researching their Ancient and Modern History Historical Investigations.
Rowzen Caro and Micaila Bellanto were named the joint winners of the 2017 Sydney University Modern History Essay Competition, one of the school’s top prizes for Year Eleven History Students.
Micaila, a prolific reader and writer about Modern History issues was praised for writing an essay on the transatlantic slave trade that “was well-written and well-presented, and demonstrates both sound knowledge of the content, and a sophisticated University-level approach to the topic. Micaila’s explanation of the shift in the status of Africans in colonial America due to changing demands for labour demonstrated a sophisticated historical analysis.”
Laura Sole, the winner of the 2017 Sydney University Ancient History Essay Competition, explored the variety of religious practices in 4th century Egypt. The judges thought the examples chosen to do this showed Laura was “thinking like an historian” and was “well-researched and argued, the essay showed good attention to the historiographical debate and had a really strong conclusion.“
The essay competition is held in conjunction with the Department of History at Sydney University, and judged by academics from both the modern and ancient disciplines. Sydney University and Chifley College Senior Campus have been working together since 2014 as part of an equity program in order to encourage students to achieve academic excellence and to consider University as an option.
In 2017, six students have been awarded conditional scholarships under the Sydney University E12 program. As well as the essay competition, the partnership includes a mentoring program with History Extension students as well as regular visits of senior students to the university campus.
Rowzen, who placed first in the competition, spent some time talking to current students at Sydney University, chatting about school and university life. She believes that the chance to work alongside university students, and have them support her in her studies, provides an opportunity “to get a feel for what University will be like. It’s really useful, it makes me think about what I will do after my HSC, and helpful in setting goals for academic success.” The judges said that her essay was “written with flair, with a good critical evaluation of a range of sources, and makes a convincing argument.”
Micaila, Laura and Rowzen were presented with their awards on November 10th, by Dr Frances Clarke and Associate Professor Michael McDonnell from Sydney University, in front of many proud parents, carers, teachers, and fellow students. The awards are presented to those students who have explored an area of history to a high academic standard, using sources, exploring historiographical issues and drawing sophisticated conclusions.
Click here for more information about the Department of History’s outreach and social inclusion program 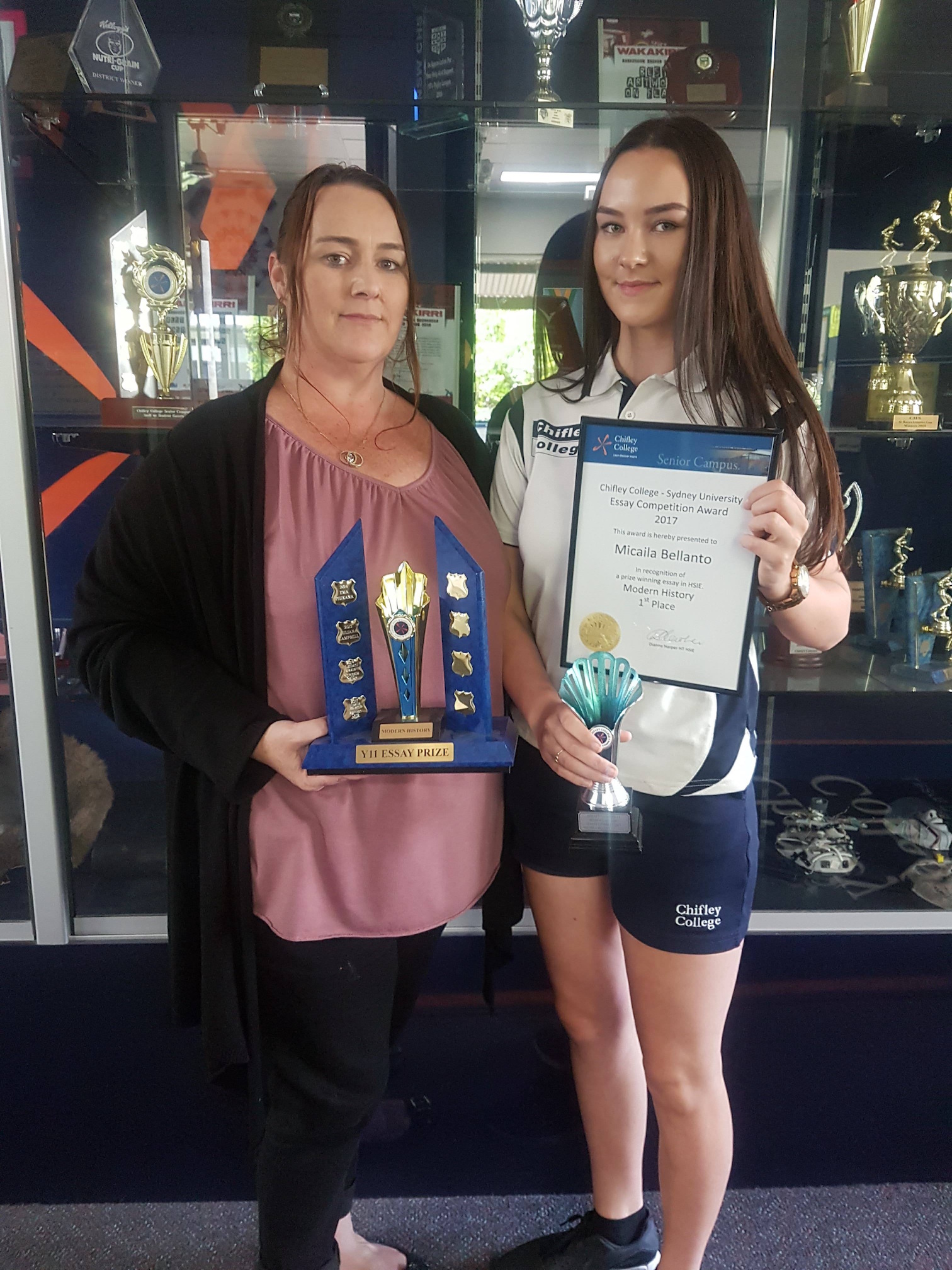