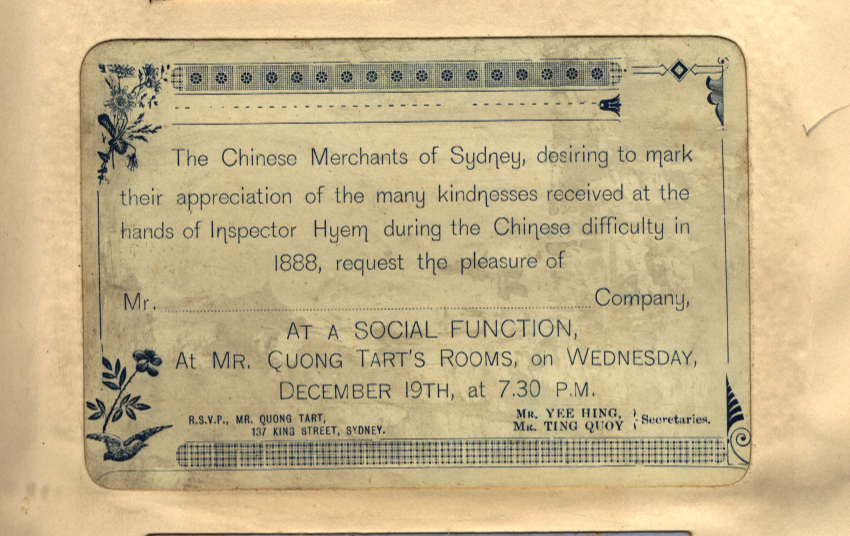 Working with the Quong Tart collection held by the SAG archives has been a fantastic experience. There have been challenges to face and overcome, but on the whole it has introduced me to an aspect of Australia’s history that I am keen to continue to explore and help the public come to understand.

The bulk of my project’s work has been uploading and adding descriptive information (metadata) to the first scrapbook of three which document the social life of Mr. Quong Tart. These scrapbooks contain invitations to sporting, social, political and religious events held mainly in Sydney from the 1880s- early 1900s. Working with this collection during the latest COVID lockdown fuelled my imagination. In my mind’s eye I pictured the numerous banquets, concerts and sporting fixtures attended by Sydney’s prosperous middle class. Although time has constrained me to only work with the first of three scrapbooks, you can catch glimpses into Tart’s relationships to other Chinese businessmen in Sydney and his role as an advocate, mediator and figurehead of Chinese in Australia more broadly.

One inconspicuous invitation card, addressed to inspector Hyem of the New South Wales Police was sent in gratitude after the 1888 Afghan crisis, where Chinese immigrants aboard the SS Afghan were barred entry to Melbourne and Sydney ports. Tart and other merchants led deputations to the colonial government to allow the immigrants to disembark, but their efforts were in vain. Against the backdrop of rising public anti-Chinese sentiment and politicians willing to exploit white resentment for their own gain. The outcome of this crisis was the expansion of policies to restrict Chinese immigration to Australia, broadly referred to as the White Australia Policy. What does this invitation card add to our understanding of this historic event? I would argue that it shows that Tart and the Chinese businessmen of Sydney worked to ingratiate themselves into the social world of the white establishment to further their political aims and to represent the interests of Chinese workers.

This is just one strand of history that can be unraveled from this collection. In the future, I hope that a talented researcher could draw upon this collection for their own research projects (historians interested in sports and athletics in Australia would be right at home in the collection!). Using the platform Omeka, I have been able to use the index of names which appear on invitation cards (for instance: performers, dignitaries or recipients of awards) so that a family historian could search for their surname and discover their role in the Sydney’s social world. In this way, what was simply a personal archive for the Tart family has been expanded to be valuable for many more.

As I was limited on the amount of time I had to develop a functional website, I was unable to spend as much time as I would have liked on providing descriptive information to assist in organising the scrapbook collection. In the future I would love to continue working with the scrapbooks- uploading numbers two and three, and perhaps finding new ways to display and promote the collection to wider audiences. I would like to experiment with using a timeline or perhaps breaking the collection down to a “browse by month” section to give a novel insight into the Tart’s social calendar.

I’d love for you to take a look at my project at this link!

My name is Caitlin Williams and I’m going to be working with the Society of Australian Genealogists to create an online exhibition highlighting the rich collection of ephemera that relates to the social life of Mr. Quong Tart, a Chinese Australian businessman who lived in Sydney in the late 19th and early 20th century.

The Society of Australian Genealogists (SAG) supports the education and research of amateur and professional family historians. They run regular seminars and workshops on conducting research with digital and well as physical records, and also provide certificates and diplomas in genealogy. The SAG also has its own archives, which is where the Tart collection is held. I have been working closely with Dr. James Findlay, the SAG archivist to develop my project for HSTY3902.

Mr. Tart was a unique figure in 19th century Sydney, who appears to have gained social acceptance amongst the middle class whilst remaining a strong advocate for Chinese market gardeners and other Chinese labourers in Sydney. He appears to have been a popular figure and taking on formal roles at many social events- singing Scottish ballads (his wife Margaret was Scottish), giving addresses and toasts, and even “kicking off” at a fancy dress soccer match! I plan on mounting a digital exhibition of the invitations to social events Mr. Tart attended or presided over. The scrapbook which was created by Margaret contains various invitations has been digitised and indexed by the SAG archivist and their dedicated volunteers. This gives the SAG an opportunity to promote the depth of their collection and potentially meet new audiences online. The volunteers have also created an index of the names of attendees and performers who appear on the invitations to these social events- a valuable source of information for genealogists.

The challenge that is posed by this collection is that it primarily textual, without strong visual appeal (photos, illustrations, objects, etc). I am using the exhibition platform Omeka to display the scrapbooks and physically map the location where social gatherings took place. I’m hoping that the map will be a visually appealing introduction to these scrapbooks, and perhaps encourage curiosity about the social world of Sydney in centuries past.  Omeka needs a lot of metadata to work effectively and I’ve spent quite a bit of time already getting to grips with is tagging and metadata features to ensure researchers can easily uncover the wealth of historic data that is stored in these invitations. I have work experience in libraries, and while I’ve not had full reign over designing an exhibition from the ground up, I’m enjoying the challenge so far and am confident I can produce a good outcome for the SAG.  I’ve really enjoyed brainstorming ideas for the exhibition with Dr. Findlay over zoom. With the COVID-19 restrictions easing in Sydney, I’m also allowed to go visit the archives to see the scrapbooks and some family photographs of the Tarts in person next week!