Founded in 1973, the Fairfield City District Netball Association (FCDNA) championed the sport of netball in the Fairfield Community. Hundreds of young girls of all ages played as part of a team in a variety of settings. From small games between local clubs to state-wide Championships, the FDCNA both promoted netball sporting culture in Fairfield and the wider state and raised Fairfield’s standing in the process. But the group began to decline in the 2010s as interest in netball began to die down. After folding in 2022, and leaving behind a wealth of material ephemera, my project sought to draw attention to the group once more.

Thus, my project seeks to honour and immortalise the FCDNA through this rich body of sources left behind. I scanned over 100 photographs and transcribed two oral histories from past FCDNA members for my community partner, FCMG, and uploaded it to their online collection. I also wrote a collection summary for FCMG and did captions for each source. I did other accessioning work for some objects the association donated, such as a signboard, a plaque, a flyer promoting the 1979 State Age Championships held in Fairfield, and six badges. All in good, original condition, these sources currently will not be published on the website because the FCMG team are waiting to photograph these objects with a professional next year. But it was so interesting to see this extensive body of ephemera and get to see how they connected with the wider history of Fairfield.

March of the Fairfield City teams during the 1988 NSW State Age Championships at Endeavour Reserve. Image by the FCDNA.

Although tiring and bad for my back (hello scoliosis!), I had fun doing this project. I truly think the FCDNA are underrated and underappreciated in both the Fairfield community and the historical record. There were so many things that I did not know that made me feel guilty. The FCDNA have built so many netball facilities such as hard courts and shared them with the wider sporting community. My family and I have been living in the community since I was born but none of us knew this rich history that was right in front of us.

This, and the folding of the FCDNA, ultimately influenced my argument for my project; how it is very important to memorialise historical peoples and groups, especially those who are not around anymore and share their stories. These local histories can tell us so much about our community and the way past peoples have interacted with one another. These relationships were ultimately a theme that I wanted to shine through my work with FCMG regarding the FCDNA.

It was also nice to help FCMG. They are quite a small organisation and do not have enough time or hands to do the accessioning work. I was lowkey surprised but how many steps needed to be done in accessioning museum acquisitions. There were so many moments when I was doubting myself, thinking that I was in over my head. But I am grateful for the experience and I know FCMG is grateful that one thing has been ticked off their neverending to-do list (shoutout to Marilyn and Alinde, my supervisors!).

Hopefully, members of the local community will engage with my project. I want other Fairfieldians to know about the FCDNA and its contributions to our city. FCMG plan on doing posts through their official social media accounts soon after they wrap up their ongoing projects so that’s exciting! I already reached out to the two FCDNA members who were interviewed. Despite only one of them responding, she seemed happy with my project and has already shared a link to the collection with her friends, families and former FCDNA colleagues. Ideally, FCMG and I would love it if the collection can be supplemented with more material. We want more members, especially the netball players, to come forward, donate some more ephemera, and share their stories through interviews. Keep the memory of the FCDNA alive.

But in the meantime, check it out yourself: https://heritagecollection.fairfieldcity.nsw.gov.au/nodes/view/4356.

Also highly recommend visiting the FCMG if you’re in the area and want to learn about Fairfield City. They are so underrated and underappreciated out here in Western Sydney.

Hope you enjoy it and have a great, fulfilling day!

Fairfield City Museum & Gallery (FCMG) is an organisation that celebrates Fairfield’s past, heritage, arts and cultural scene and the local, diverse community. Founded in 1983, it is the largest exhibition space in Fairfield City. FCMG has three distinct sections; the 1913 Museum building, the Stein Gallery and the Vintage Village. Throughout the year, within the first two spaces, FCMG has a rotating program that focuses on contemporary art, social history, and community-based projects and exhibitions. Occupying the Stein Gallery is the current exhibition, re-member, which features eight artists from South-West Asia and North Africa celebrating their heritage through commissioned artworks.

In comparison to the contemporary focus of the 1913 Museum building and Stein Gallery, the Vintage Village aims for nostalgia. Here, the space recreates past historical moments and places within Fairfield for visitors to conduct both guided and self-guided tours. Visitors can visit the ‘Hay Shed’, symbolic of the rural industries that were prevalent in Fairfield until the 1960s, the heritage-listed 1880s Slab Hut and other historically-significant buildings to Fairfield. 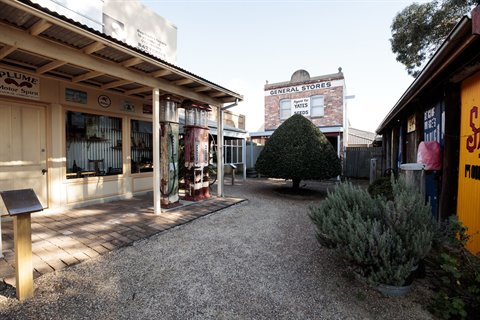 The Vintage Village. Image by FCMG

In addition to these physical spaces, FCMG also has a thriving online presence (https://heritagecollection.fairfieldcity.nsw.gov.au/). They have a rich, cool digital repository that is open to the public to browse through different objects, images, and archives. The team at FCMG go out and collect all kinds of sources from local groups and individuals to add to their collection.

Ultimately, FCMG values and respects Fairfield’s history and the local community. They prioritise community engagement through various initiatives such as immersive educational programmes for Year 1 and 2 students and the wider public to learn about Fairfield’s past. They also cater to nostalgia by offering a guided and interactive group tour for Seniors that, unlike other tours, allows visitors to handle objects from FCMG’s historical collection.

I actually went to FCMG when I was in Year 2 for an excursion. In hindsight, it was my first experience with history and the arts. I don’t remember everything clearly but I do recall seeing so many Indigenous artworks and artefacts during an exhibit. I also remember going inside the 1880s Slab Hut and feeling super down because everything was dark and gloomy. This experience ended up being the biggest reason why I wanted to do my volunteer work at FCMG. Maybe it’s because I like nostalgia or maybe it’s because Y2K is trendy now. I wanted to go back in time and see what has changed in the 15+ years since I first came to FCMG.

My volunteering won’t start until November during STUVAC (sorry Michael!). But right now the plan for my project is to help out with a new acquisition. Recently, a local netball association closed its doors so the team at FCMG have gone out and conducted oral histories with members and collected photographs, documents and other memorabilia. I will help accession these artefacts into the museum’s physical and digital collection, scanning and preserving the sources using some high-tech scanners and equipment. A little nerve-wracking since I suck at technology but I am very excited to help out with preserving and sharing this unfamiliar local history.