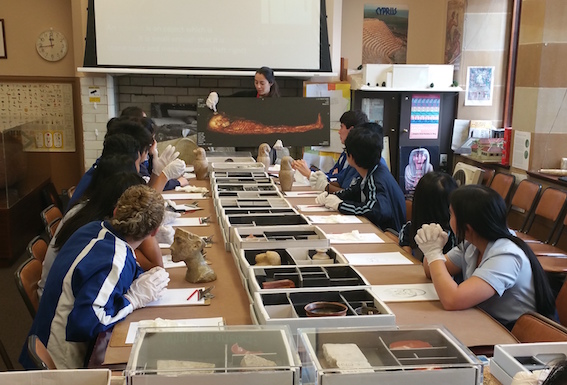 Parramatta students handling artefacts from the Nicholson Museum
Just as they were submitting their subject preferences for years eleven and twelve, Year 10 students from Parramatta High School visited the University of Sydney in September to learn more about studying History. Associate Professor Michael McDonnell, along with Dr Elly Cowan and Professor Chris Hilliard, greeted the students and introduced them to the expansive range of topics that fall under a history degree, and the potential career options opened up by studying history at university.
A hands-on artefact session with the Nicholson Museum followed, and as the class examined a range of Ancient Egyptian artefacts, it soon became clear that we had an expert among us. Turns out one of the students could remember precise details about Ancient Egyptian funerary artefacts from a school project she had completed in Year 4. With a memory like that, she is well-placed for a career in archaeology.
Afterwards, the students were introduced to the main exhibit of Nicholson Museum by Dr Jelle Stoop of the Classics and Ancient History Department. This was followed by a campus tour led by USYD volunteers Emma Cleary, Anastasia Pavlovic, and Minerva Inwald. As they learned about and saw more of the campus, many of the students opened up a stream of questions on university life – about studying anything between journalism and music, about making friends and getting involved in social justice on campus. Others expressed uncertainty at making decisions about their futures – which, of course, is pretty normal, and there are few places better than university to embrace and explore that uncertainty.