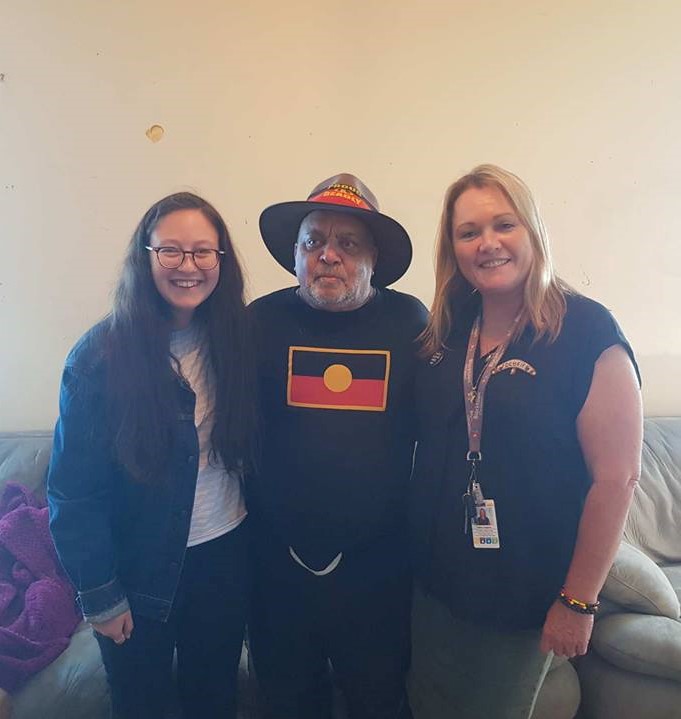 I was very excited when I checked the available 3000 units for history, and saw a unit that really spoke to me called “History Beyond the Classroom”. One of my goals after studying at university as a secondary high school teacher, has always been to teach students about history in a setting outside of the classroom, through aspects like community history in an interactive space. This unit has allowed me to explore what it is like working outside a classroom setting, and to dive into a photographic and oral history of Uncle Greg.
I sent an email off to the Blacktown Arts Centre, in hope of getting a volunteer position with the organisation. Miguel had just the right position for me. I was directed to a lovely lady named Debbie, the Arts Centre’s Solid Ground Education Project Officer. Debbie had been working with a local Aboriginal Elder to sort through his personal collection of historical ephemera. Not only had I got a volunteer position, but I had been lucky enough to share in the history of a respected Elder in my local community.
From the first meeting, Debbie and I discussed my role and responsibilities. Debbie and I organised to meet at Uncle Greg’s house every week for two hours. I have been using this time to go through Uncle Greg’s old photographs and documents and make digital archives (matching photos to articles or events). I sit down with Uncle Greg and talk about key aspects about the photographs and then write them on the back of the hard copy. For example: Where was this photograph taken? Who is in the photograph? When was this photograph taken? Uncle Greg is able to tell me almost everything about the events in a photograph, just from a quick sighting and I am astounded at his wealth of knowledge. After sorting all of the photographs, I am going to record Uncle Greg’s oral testimony about some of the most important photographs. I am also going to create a presentation with Uncle Greg to use at his Welcome To Countries. The presentation will display his work in the community, his performance in local bands, artwork, important events he has attended and important persons that he has met. Uncle Greg is dedicated to working for and in the community and this has been reflected throughout the photographs I have come across.
It is really interesting going through Uncle Greg’s photographs. I feel special, because I have been invited to participate in learning about Indigenous culture and invited to share in knowledge that is highly personal and has been passed down through many generations. I take this seriously, as it is such an immense privilege. I have heard so many amazing stories from Uncle Greg already so far.
Often I forget to ask him to record his story because each photograph triggers a different memory and I don’t want to interrupt his storytelling to ask whether I can record. Instead when I get home from our visit, I write down everything I can remember in the form of a diary log in hopes to ask him about it again at an appropriate time.
I have been very conscious about ensuring that I am working alongside Uncle Greg, through every step of the process. I think it’s important to inquire about what photos he thinks are important, what he would like to include, how he would like to tell his history and how he would like the photos to be presented.
In the coming weeks I look forward to continuing listening and sharing in Uncle Greg’s stories through archiving and creating his presentation.