My project is the result of my combined passion for history and food. When considering what organisations I would like to work with, The Monday Morning Cooking Club (MMCC) made its way to my list – an outlier amongst the more conventional, historically-orientated museums and libraries. Currently, MMCC is a group of four women who, working as a non-for-profit, preserve, test, curate and share heirloom recipes from the Jewish community. Based in Sydney but focussed globally, these recipes are shared through their cookbooks. As a fan of MMCC’s books, though not sure what form my project would take, I knew that their mission resonated with what I love about history. My project is multi-layered and the result of conversations mainly with Lisa Goldberg, a founding member of MMCC. From these discussions, a focus on both the future and the past of MMCC emerged.
Looking toward the future, part of my project has been focused on the preparation of several biographical vignettes about the recipe contributors who shall appear in MMCC’s next book, due for publication in 2020. This part of the project is informed by historian Carol Harris-Shapiro, who argues that the way people engage with food, particularly in Jewish culture, communicates identity of individuals and groups. Working on this, I came to realise that I was collecting valuable historical sources, in particular about Jewish heritage, culture and lives. I have thus compiled the information into an accessible archive in the form of a Google Doc to be shared with MMCC in case future historians want to continue work with this information.
A secondary aim for my project is stimulating ‘historical consciousness’ about how these personal stories fit within the broader history of the global Jewish diaspora. Inspired by SBS’s Cronulla Riots website, this has been achieved through the creation of an online, interactive StoryMap through which the stories can be considered simultaneously as part of this historical phenomena. See https://uploads.knightlab.com/storymapjs/0a3c0812ade313d5efd123bf633c7f89/mmcc/index.html
Another element of my project has been looking back at the past three MMCC cookbooks, in order to map the heritage of the MMCC community. Whilst MMCC has been aware that the cooks who had contributed to their last three books hailed from diverse places and backgrounds, they had not kept comprehensive records about these details. Using the bios from the previous books, I created a spreadsheet documenting where the cooks of each book were born and grew up, where they had now moved to, and where their forebears had originated from. I then compiled this into a summary per book as well as an overall summary, drawing the data together to create a clearer picture of the heritage of the MMCC community. From this data, I calculated statistics and used data-visualisation to create an infographic report to communicate my findings to the MMCC team. This part of my project is layered in presentation and audience, with my findings about the diversity of the contributors being communicated to MMCC’s audience through a guest blog post that I was invited to write. This has been published to the MMCC blog and is available at https://mondaymorningcookingclub.com.au/2018/11/26/the-monday-morning-cooking-club-melting-pot/.
It seemed wrong to do a project focused on food without any cooking or eating and so, toward the end of semester I baked one of MMCC’s recipes. As I formed the sweet, date-filled pastries called Menanas, shaping each one by hand I felt a connection to the cook who had contributed the recipe. It was from this that I came to appreciate the way in which cooking is a tangible form of history, with it, in a way, constituting a form of historical reenactment. In this way my project is also inextricably informed by my personal experience of cooking MMCC’s recipes. Over the years, by cooking from the MMCC books, I have gained valuable insights into Jewish culture and history. This idea is informed by the arguments of several historians, including Michelle Moon, Cathy Stanton and Monica Janowski, who all concur that the sharing of food can forge connections between the past and the present. My project constitutes a creative and original contribution to this scholarship, as well as a significant contribution to the mission of The Monday Morning Cooking Club. 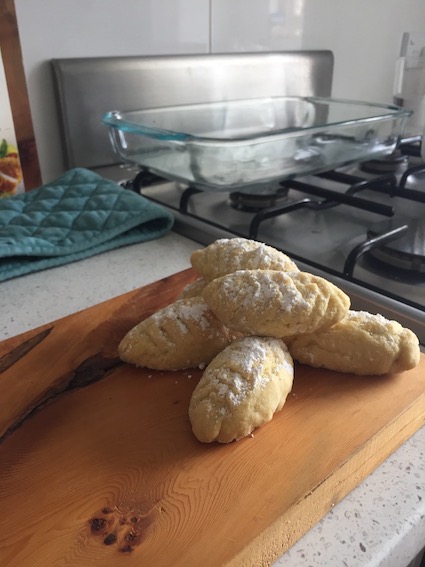 Finally, it has been such a privilege to work with the wonderful ladies of The Monday Morning Cooking Club as well as their contributors in producing this project.